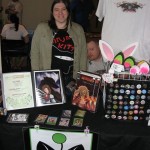 The Vancouver Comic Arts Festival was a blast, there was a TON of people there over the May 26-27 weekend, and the weather was spectacular. The Roundhouse was such a cool venue, and there were a lot of people stopping in I don’t think would normally go out of their way to check out the comic scene in Vancouver.

I had a half table there that I was sharing with Ven Seun from Mind-crash.net, who had some really nice prints, and was kind enough to share where I might set about getting some of my own. I’d say for a first year, it was a smashing success.

I have to say I met up with a lot of people I hadn’t seen in ages, which was super cool, including James Strocel, who used to write for Shifters and now has his own Vancouver based geek themed events blog at Raingeek.com. He snapped this rather snazzy picture of me and my beloved henchman, D, at our table. For more lovely photos of the event, check out his blog article.

My next convention is going to be Cos & Effect! I did manage to secure a spot, and will be  there August 24-26, 2012 at UBC. If you are into cosplay, anime, video games, etc, this is THE premier cosplay event in Canada and you shouldn’t miss it. Even if you don’t like to dress up, its amazing for the sheer camera fodder. So get your tickets today!

Links to other important sites

Stuff I'm a part of